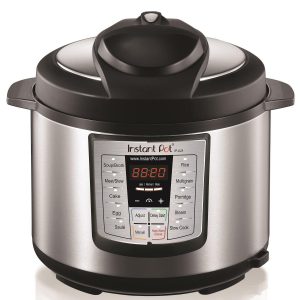 The Instant Pot LUX60 6-in- 1 Multi- Use Programmable Pressure Cooker is an impressive appliance. It is easy to tell from its long name that it contains some features that can come in real handy to any cook. But just like with most other things, it has its fair shares of cons that seem to somewhat water down its extraordinary features. By going through the pros and cons of the cooker, it is hoped that you, the buyer, will reach an informed decision on whether or not to buy it.
Features of the Cooker
This pressure cooker measures 33cm by 31cm by 30cm. It weighs a whopping 5.3 kilograms, which is rather heavy by any standards. It has a capacity of 6 Qt. The cooker produces 900 Watts of energy when in use. It works on a 239- 244 F temperature range. If you are excited about getting this great pressure cooker, go to Amazon and get one right away:
Away from the dimensions, the cooker is a six in one appliance. This means that it can carry out the functions of six different cooking appliances. It is a slow cooker, sauté, pressure cooker, warmer, steamer and rice cooker all combined in one. It also comes with 10 in- built programmes for common foods. Moreover, it has a warming feature that keeps food warm for up to ten hours after it is ready.
The cooker is made of food- grade stainless steel both in its interior and exterior. The exterior is also finger- print resistant which ensures that the cooker stays sparkling clean all the time. The amount of food you can cook using the cooker is also quite proportionate. It also has ten safety mechanisms to ensure that both you and your loved ones are safe while your food is cooking. The cooker comes with a one year warranty and a full accessory pack. The accessories include a recipe book, a rack, time table and utensils.
Pros of the Pot
1. Programmable and Versatile
The fact that the cooker is programmable makes cooking an easy task. You can have virtually any meal ready at the touch of a button. The fact that it comes with 10 in- built programs makes it all the more easier to prepare certain meals. Do not let the fact that it has so many programs fool you into believing that operating the cooker is a hard task. The opposite is in fact quite true. You can familiarize yourself with the cooker in a matter of minutes.
The pot is also remarkably versatile. It can serve the purpose of six different kitchen appliances which only goes to show just how useful it is.
2. Durable and Safe
One of the perks of using this appliance is the guarantee that it will serve you for a long time. It is hardy and nearly indestructible. This is no surprise given that it is made of top quality stainless steel in both its interior and exterior. It is very easy to clean the pot. In fact, all you have to do is put some water in a dirty pot, set the pressure cook on, wait for the water to become steam, pour it out and then wipe your now clean pot.
The pot is also as safe as can be. The engineers who designed it were keen to include 10 foolproof safety mechanisms in the design. For instance, the pot has a primary pressure valve and a secondary last resort valve to keep pressure levels in check.
3. Efficient
This third generation instant pot cooks nearly six times faster than a regular slow cooker. On average, it also uses 70% less energy than other cookers of its type. The fact that it uses less power means that you spend less on electricity bills and you could end up saving a lot of cash. The cooker also produces less noise compared to ordinary pressure cookers which is a big plus for it. The efficiency of the pot is one of the reasons why many people prefer this product.
Cons
1. 1 Pressure Setting
Perhaps the greatest drawback of this instant pot is the fact that it has only one pressure setting. It is disadvantageous because certain foods cook better under certain pressure settings, and this cooker robs you of the opportunity to vary the pressure as you would like to. The manufacturers should have at least given two or three pressure settings in order to take care of different meals.
2. Malfunctioning
Tales of the instant pot malfunctioning after less than a year of buying abound. Some complain that after a while, the cooker starts losing pressurization, thus rendering it useless as a pressure cooker. Others complain that the lid at times jams making it hard to open the cooker. Fortunately, the cooker comes with a one year warranty so in the event that it starts malfunctioning before the warranty expires, you can get the issues fixed or bet yet get another pot.
3. Can Causes Burns
Another complaint that often surfaces regarding the cooker is that it can cause burns unless handled carefully. This is not a problem that is unique to this particular instant pot however, but it is a bit more common than it is with other models. You can easily avoid suffering burns when using the cooker by being keen at all times and only using it for its intended purposes.
Conclusion
On the whole, this is a great cooker that can save you both time and labor. In fact, it can even save you money in the by helping you save on your energy costs. It is a durable pot that will serve you for a long time, and serve you well for that matter. It is easy to clean and maintain this pot and it is also incredibly energy efficient. One cannot question the versatility of this pot as well because it can serve the purposes of six kitchen appliances.

You can purchase this cooker from many retailers in both brick- and- mortar stores as well as online stores. There is an unmatched convenience of purchasing goods online. However, you should only buy goods online from reputable retailers such as Amazon. You can find this product on Amazon at great prices, and you are guaranteed to find an original and genuine product.

The Instant Pot LUX60 6- in- 1 Multi- use Programmable Pressure Cooker is currently available at Amazon.com for $79.00 with free shipping.